D is for Divide et Impera

D is for Dessy of course... but that would be narcissistic
so back to basic, D is for Domba (sheep/ lamb)
my very first reason to learn making amigurumi was for to make a lot of Domba doll,
because they are cute, and I'm collecting a lot of Domba toys.
But I never made any domba before  because their curly fur are complicated.
Now since I learned a new stitch from a book, I finally tried making some Dombas

to make a little twist, I improvised the theme to be "Divide et Impera" or Divide and rule,
which in Indonesian History text book translated as "Adu Domba" (Lamb Fight)
literally, Indonesian has a traditional art called "Adu Kambing" or Sheep Fight (ram fighting). Wolfie: Hey, Sheep, he said your football team is a loser! Wolfie to the other sheep: That sheep said that you are a backstabber and a bigmouth! Wolfie: D is for Divide et Impera, I divide then I conquer!
There's also a proverb "Serigala Berbulu Domba", wolf in Lamb fur, which means someone with a very bad intentions, pretends to be kind and harmless.  so far, Wolfie is my favorite characters I made :)

a behind the scene nose picture: 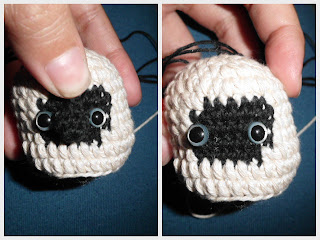 with nose..or without nose
I knew it's anatomically wrong, my design was the noseless one, but I think it's cuter with a big nose :p
speaking of nose, I really really love Wolfie's nose, it's my first time using that nose.
Posted by zuperdzigh at 8:40 PM