translation:
I have five balloons
with different colors
Green, Yellow, Gray, Bright Red (Pink), Blue
The green balloon exploded, POP!
I"m so misserable
Now, I only have four balloon left
I hold them tight
Balonku is a very famous children song.
Lately there were a lot of gas cylinder explosions.
A lot of people injured, and some of them dead.
They said, the gas cylinder, which was green exploded because of the Balonku's lyric.
If only they painted the gas cylinder with different color, it wouldn't be exploded.
Posted by zuperdzigh at 5:26 AM 2 comments:

It was a pretty messy week
Not because I was busy doing things, but because of bad planning,
or to be exact it was a bad strategy, I basically don't make plans.
I knew I didn't post a new amigurumi last week, and I should have post something more this week.
But I'm getting worse, no, I'm not sick, I'm feeling fine.
I'm just in hibernate mode.
Maybe I'm a bear The name is Pichu, taken by my nephew's name.
Yup, it was knitted!
I was planning on sharing free pattern guide umm something, I'm not sure what would it be,
I'll think about it later after my hibernation over.

by the way, I'll be busy making design project for the next week,  and I'll be on vacation on the week after.
So I'm so sorry that I might unable to post new amigurumi for the next couple weeks :(
the bright side is, I usually get most inspirations by making unrelated projects :)
Hopefully I'll finish my design project as soon as possible then realize the inspirations

The bad and the good news

I haven't finish my weekly crocheted/knitted toys.
No that's not the bad news.

It's not really about my toys, but about the animal in Indonesia.
Last week, a Sumatran Tiger found dead at the Zoo in Surabaya.
Sumatran Tigers, the Panthera tigris sumatrae, are one of the endangered species in Indonesia, and it's a shame that the beautiful creature died at her own cage because of some unknown causes.
There must be some ways to help the Sumatran Tigers.
I need to make some research before tho.
Any ideas? the picture was from this post
The good news is, BOSF will release the orangutans back to their habitat after 9 years.  You may read the press release here.

while we are waiting for the realization, don't stop to help the little orangutans at the conservatory.
Some of them still need to take classes before going back to the wild.
As we know that some of them were kept as domestic pet, and loosing their wildness since they were babies.
therefor, they have to learn how to survive living in they real home, the rain forest.
How do we help? The BOSF (Borneo Orangutan Survival Foundation) have some ways or you may check my orangutanku project too. 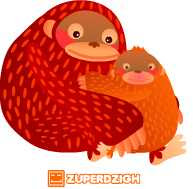 Oh and by the way check my animation too :)
Posted by zuperdzigh at 6:40 PM No comments: This is officially my first knitted project :)
I wrote in my profile that I'm a knitter,
in fact I just learned how to knit recently, let's say, since last week.
I usually made doll by crochet hook, not by knitting needle
Thanks to Anna Hrachovec's knitting mochimochi book, I finally can knit!
The first project I tried was a pig doll, I made the body and ears, but I'm too lazy to finish it.
I can't wait any longer to try making zpiderdzigh knitted toys with my own design.
So, I made the spider last night, and finished it by today lunch. The spider based on the zpiderdzigh :)
Too bad I can't make the sharp teeth, but I guess it's enough for a beginner :p I just ordered the knitting tools set so hopefully I could make more knitted toys as soon as it arrived at my home.
Posted by zuperdzigh at 12:47 AM No comments:

last night when I was going to bed, I checked my inbox once again by my phone

what a wonderful surprise, there is an e-mail from Felipe's master, Ulrich Kleffel :
Hi Dessy,
today we made a little tour with Felipe. 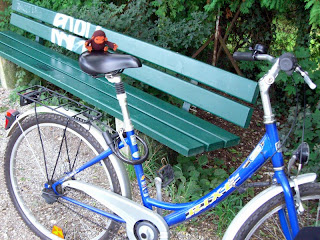 We took our bikes and visited a small castle in the neighbourhood: 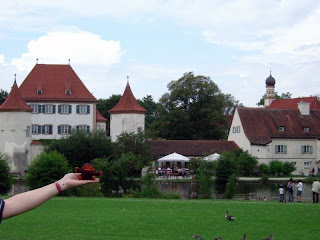 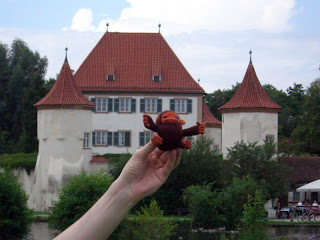 After feeding some ducks we picked some sunflowers. 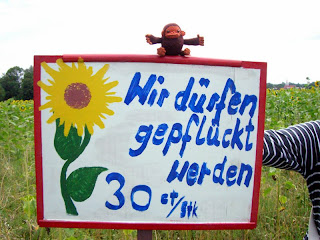 I was unable to open the picture on my phone, therefor, I had to wait until I went to the studio on the next morning, such a long wait.
But once I saw it, it really made my Monday Morning :)
Thank you very much, Uli!

Now, aren't you agree, Felipe is very lucky to have a very kind master?

Almost failed my one amigurumi every week
Not that I didn't have time to make amigurumi,  but because there were a priority list.
anyway, I added a new page here since last month, a W.A.I.D.R.N page,  so you could check what am I currently doing.  Or to be exact what crochet project I am currently doing.

Here's the orangutanku #7: Hanoman,  the white orangutan.
China have Sun Go Kong (a.k.a Sun Wu Kong or Sun Go Ku) the monkey king from Journey to the West.
India have Hanuman from the Ramayana, the epic story, which is also well known in Indonesia.
In Indonesian version, Hanuman is Hanoman or Anoman, the white and mighty monkey. I knew monkeys are different to apes, orangutan is an ape, not a monkey :)
I made this orangutan doll not based on the Hanoman story, I just wanted to make her white, the name came out later.
The real Hanoman have a black and white checkered cloth and a crown (and have a mighty power of course). and by the way I'm thinking of making more colorful orangutan dolls, any suggestion?
Because all I think is pink orangutan :p
Posted by zuperdzigh at 8:00 PM No comments:

Email ThisBlogThis!Share to TwitterShare to FacebookShare to Pinterest
Labels: amigurumi, for adoption, Orangutanku

I don't know how to describe it,
I'm really happy.
No

I'm VERY HAPPY
ah... I could write better expressions in Bahasa Indonesia than in English to tell you how I feel :) 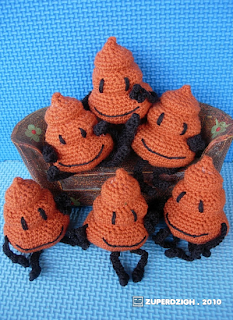 remember the Poo of Mythfits?
I made the crochet version months ago, and later Justin, the mastermind of Mythfits commissioned me to make more.
Of course I gladly did it, I'm a fans!
it was a really fun project, even tough there were many problems behind it.
first, the brown yarn was out of stock.
I did go to the town, looking for the yarn ALONE, to a lot of craft stores, and didn't found the yarn.
I was only need a little bit more to finish the last Poo doll then.... let's say I did some magic trick, so the yarn problem solved.
haha.. bad story teller? well it's my darkest secret, a magician shall not reveal her magic tricks right? 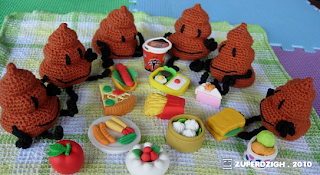 the second problem was the shipment.  I was using the regular service, but I never thought it would need almost a month to send the box of Poo from my place to their master.
I got many acnes because of the stress worrying about that box, but fortunately, The Poos finally arrived in NY.
New York.  That city I saw on CSI: New York.  I never been there, and who knows where will the Poos go next?
my older sister even said, "Ah, if only you were a poo..."

And by the way, looking at the post at Mythfits,  the problems were nothing.
I meant, just read the post, and see the pictures, they are priceless!
Thank You :)
Posted by zuperdzigh at 4:57 AM 5 comments: