I was planning to make about 26 orangutan dolls last year and sell it to adopt a real orangutan on the shelter.

I failed making all 26 orangutan dolls before the end of 2010, and I don't think that I will try reaching the target this year.
it's not because I stopped to care, but there's a new project waiting. I would still gladly make you an orangutan doll and the 15% gained from the adoptional fee would belong to the real orangutan at the shelter as a donation.  So the different is I would only make orangutan dolls by order. 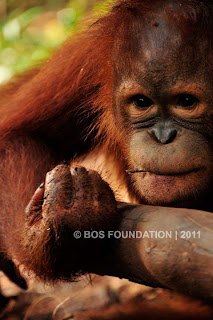 He's cute, right?
for now I only adopted Nody for 3 months period, but I think I will continue the adoption after the next 3 months.  BOSF sent me the story of Nody, so it's like I have a kid, paying for his food, but takes no responsibility (which is FUN!).  like my sister said, at least we know our money used for something good.
So... if you are thinking to spend your money for a good cause, you might try adopting orangutans.

by the way, when I started the orangutanku project, I made a prototype, which I really love and I kept for myself. therefor you won't see him available for adoption. PS: will announce the new project soonish ;)
PSS: it's Nody, Not Yadi!
Posted by zuperdzigh at 6:02 AM

Email ThisBlogThis!Share to TwitterShare to FacebookShare to Pinterest
Labels: Orangutanku