After I made the first big orangutan, I thought of making my own orangutan.  Well it's no longer the traditional orangutan cause it has to be Pink.

So I'm using the free yarn from @RajutanMama , I have started crochet this pink orangutan since March.
I even brought it along during my trip. From Jakarta to Solo (by Train) and then Solo to Jakarta.
then left it for a while because I'm out of yarn.

then continued finishing it again, I brought it along in my trip from Jakarta to Malang and to Jakarta again. I thought I would finish it by the time I arrived in Malang, so I can took picture with her at the Batu Secret Zoo and Prigen Safari Park but I wrong.

I brought it along to my work everyday, which was silly, cause I don't crochet/ knit during workhours.
I just brought it along wherever I go, and I tried to finish it whenever I have time to finish it.
And I just finish it, a few hours ago while waiting for the Job interview.  Stress crocheting, you called it. I name her Pinkong (Pink - Kingkong), cause she's not really an orangutan.  When I was working on her, people kept asking, "What orangutan? but it's Pink and Black!"

Finally, we could snap a picture of us together today :) 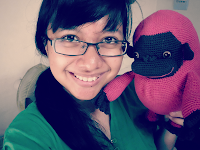 Posted by zuperdzigh at 2:46 AM